Author's Statistic:
Posts: 363
Threads: 80
Joined: Mar 2016
Posts: 363
Threads: 80
Joined: Mar 2016
#1
Feb 4, 2017, 04:45
One of the things I'm pondering on doing this year is some motorsport photography. I love motorsport - especially bikes - so it feels like it could be a good fit. Alas, I've never ever tried panning. So I figured with any races still months away this would be a good time to start some practice.

It's not easy. The shot below was the only one of about 50 that was anywhere close. And only then because (a) he was riding slowly and (b) I upped the shutter speed to 100. But at least there's some motion blur so I know I'm on the right track. Just need lots more practice.

But the other thing was I didn't feel comfortable standing by the roadside taking shots of strangers, albeit in cars and vans. I get the same thing when I go out with the intent of doing street work. It just feels intrusive and wrong. This morning one bloke even circled around and drove up behind me to ask what I was doing. Not in a nasty way - but it did reinforce that feeling of me doing something intrusive. Maybe I shall just have to practice at races themselves. 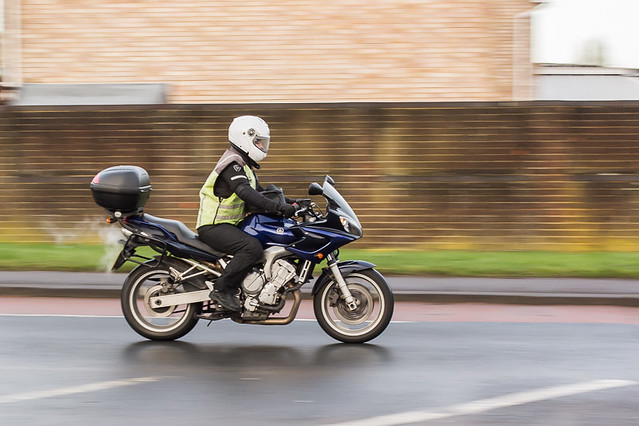 Author's Statistic:
Posts: 363
Threads: 80
Joined: Mar 2016
Posts: 363
Threads: 80
Joined: Mar 2016
#3
Feb 4, 2017, 08:21
Spookily enough I raised the same idea with another photographer friend. We both ride bikes and he's had the same reaction to practicing panning as I have. So I've suggested with combine a day out on the bikes with photographing each other :-)
Find Share
Reply
Quick Edit
Full Edit
GrahamS

I tried this back in the Film days at Donnington Park, nothing much came out LOL. There's a stockcar track a few miles from here, think I will see if they allow "pro" gear in the audience. I know a few places won't allow cameras with detachable lenses around here. Stupid.
Gallery My Gear About Me
Website Find Share
Reply
Quick Edit
Full Edit
delb0y

I shall see how the sports photography goes this year. If it flies then I'll have to consider the gear. At the moment I have a D7100 which has a notoriously small buffer. The longest lens I have is a 70-300, but it's not particularly fast f/4.5 at best, but as I go up the zoom lens it narrows.. But the combination should do for a start :-)

Thanks Diane
GrahamS
Take my advice.  I'm not using it.

I've had some succcesful (and not so good) in there

Other option is the back straight at Snetterton ... but they're reallly pushing on there so there's a lot more 'not so good'
Attached hopefully is one of the better ones
Find Share
Reply
Quick Edit
Full Edit