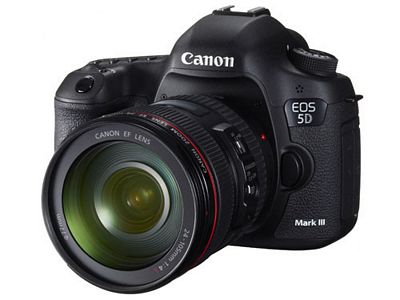 The main features and selling points for the Mark III are as follows:

One of the more distinct differences almost immediately noticeable on the Mark III from the Mark II is the fps. With a 6 fps capability versus the old Mark II’s 3.9 fps standard the Mark III feels much more responsive and nimble when doing burst shots or sequential photo sessions. Press the shutter button halfway to engage the focus mechanism (if set to the AF mode) and then press down fully to engage the burst (when set) or the sequential shooting. Recording speeds are almost perfect with little to no lag between shot and card data storage. Compare this to the Nikon line-up of the D800 or D7000 and the Mark III shows itself to have a slight edge in speed and data recording. One noticeable difference too is a lack of shutter release noise when taking a photo. If users wish to have the audible indicator it must be turned on through the back panel display and menu.

The Canon EOS Mark III is slightly larger than its predecessor. It measures in at 152 x 116 x 76mm, approximately 3mm larger than the Mark II. The Mark III is also slightly heavier as a result of the shock- and weather-resistant housing. The housing is billed as weather resistant, not proof, so care needs to be taken for rough field use in inclement weather. All dials, menu options and buttons remain in the same location as on the Mark II so Canon users will be familiar with the locations. In addition the Mark III uses the same menu hierarchy on the computer and screen controls as the Mark II making the transition nearly effortless. There is a more pronounced thumb rest on the Mark III and it is very similar to the Nikon D800 body and thumb rest.

One thing that Canon surprisingly leaves off the Mark III is a built-in flash. Rival Nikon outfits the D800 and D7000 with a built-in flash. A fully compatible hot-shoe comes on the Mark III with Canon claiming the addition of an external flash versus a built in flash gives the shooter better range of light and better control.

One other surprise with the Mark III is the absence of wireless upload abilities. The Mark III is not equipped for Wi-Fi transfers (to be fair, neither is the D800) and in this digital and progressively wireless world it comes as a bit of a surprise the Mark III is not so equipped. Standard mini-USB to USB ports are available for data transfer as well as the SD and CF slot ejection tabs.

Shooters who like to geo-tag their photos need to purchase the additional GPS module for the Mark III as it is not equipped out of the box. The GPS module also gives the Mark III Wi-Fi transfer ability so this may be the way to go for those in need of both abilities.

The Mark III comes (out of the box) with a LP-E6 lithium ion battery. Canon says the battery will provide up to 950 shots on a full charge and can hold up to several thousand charging cycles before needing replacement. A charger is included with the Mark III kit. Nikon’s D800 comes equipped with EN-EL15 battery power that does not last quite as long (up to 900 shots per full charge). The Canon Mark III accepts battery packs and grips that enhance charge and battery power by twice the standard battery. This is great for photographers in the field or on extended shoots away from power sources. When in a pinch the Mark III accepts AA batteries.

Just like the Mark II the Mark III has manual over-rides for ISO, and separate data transfer settings for either SD or CF cards. White balance and +/-3EV SVO options are all found on the top up display and the rear display. Manual settings allow for complete adjustment using either the dial slider or the hierarchy menu and spinning disc on the back of the Mark III. The Mark III accepts Canon VR and IR lenses as well as aftermarket and third party lens options.

Like the Mark II the Mark III has editing and movie frame options off the camera. This allows for in-the-field edits and adjustments for both still and movie settings. The Mark III shoots in RAW or. jpg formats (or both at the same time if desired). The viewfinder offers a two percent improvement over the Mark II with its 100 percent usable screen. This means less noise on the edges when editing or displaying off the camera and more pinpoint and precise shooting from the viewfinder.

The final verdict is that the Mark III is a definite improvement on an already successful formula achieved by the Mark II. Professional shooters will appreciate the heft, housing and full 100-percent viewfinder screen. The CF and SD card slots ensure that memory is available throughout the world and that the camera remains a versatile professional full-frame DSLR camera.