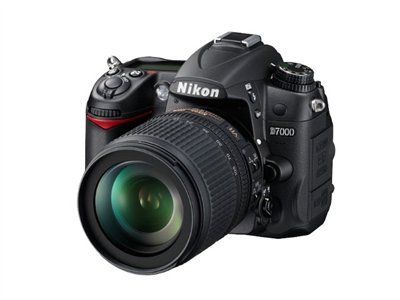 Nikon builds on its DSLR success with the D7000, a camera released as a full-frame option for the “prosumer” market. The D7000 is the follow-up to Nikon’s D90 model. The D7000 is a bit of a paradox; it is stealthy in that it looks too simple to be as complex as it is. The complexity is in the innards and not in its use. Nikon keeps the camera priced under $1000 and still delivers a tremendous amount of punch for the bucks. The D7000 is best suited for competing with the Canon EOS 5D Mark II.

The D7000 is a much smaller camera for this range than typical. It has measurements of other Nikons in the amateur or entry-level DSLR cameras like the D3100 or D5100. That said, the magnesium body does a great job of protecting the sensor and computer from weather and mild drops. A rubber casing around the palm makes the D7000 feel much more solid than it looks. Call this the “stealth” package of the D7000. All former features such as lens integration, menu control buttons, aperture dials and hierarchal menu controls remain on the D7000 making it an easy upgrade with little to no learning curve.

Nikon packs some new tech and features into the small housing and body. Nikon uses a 16.2 megapixel sensor coupled up with the Nikon proprietary “Expeed 2” processor. The combination makes record speeds nearly instant even when the D7000 is set to the maximum six fps burst shutter speeds. The dual SD card slots mean that the shots get placed into a data-reserve up to 64GB (32GB per slot). The analog/digital conversion system is based on a 14-bit method that gives the D7000 a powerful upgrade from the D90.

The D7000 is the first DSLR in the Nikon family to incorporate high-definition video technology, with the camera shooting HD video to 1080pixel specifications.

Nikon continues to grow the “Lens Registry” function for Nikon and aftermarket lenses. The CPU stores the lens info and remembers shooting preferences for each lens. This is nice when doing quick changes on shoots or in the field.

When the D7000 is set at speeds between 100 and 800 ISO, pictures in.jpg format come through clean as a whistle with no noise. Go up in speed and there is slight noise and composition loss at the edges. Using the menu selection to give the photo quality the maximum resolution alleviates this. Color calibration and quality remain among the best in the photography world, one of Nikon’s trademarks.

Metering, exposure and aperture are all set using the shutter-button thumb dial, or via the 3-inch LCD display and the menu button options on the rear of the camera. The controls are a bit more intuitive versus the Canon EOS set up, making the D7000 slightly easier to learn for the first time user. Some D7000 shooters have reported dead pixels when using the D7000 for video shoots in low light.

The D7000 is scorching fast for the auto focus. The D7000 is clocked at 0.3 seconds for the auto focus on most equipped lenses, ensuring the shot will not be lost due to slow shutter or processor speeds. This is the second fastest Nikon in the company’s line up and is slightly faster than the Canon EOS 5D Mark II.

Auto options can be set via the registry function or on the fly. Options for auto focus include 9-, 21- or 39-point, single-focus or a tracking feature that gives full 3D options. One slight flaw in the system is the slide effect if the tracking sensor is not set properly. Be sure to take some experimental shots on the tracking prior to getting serious in the shoot as subjects may get blurred or lost on the screen.

Between the two SD card slots the D7000 can be formatted and set up for a variety of picture resolutions and protocols. RAW, .jpg or a combination of both is possible via the two slots. Users can adjust the quality of resolution as well while shooting the same subjects. This is accomplished via the menu hierarchy and button controls on the back of the camera.

The Nikon D7000 kit comes with a charger and rechargeable lithium-ion battery pack. Nikon claims the battery pack will live through several thousand charging cycles and gives the D7000 up to 1,050 shots on a full charge. Compare this to other cameras in this range such as the Mark II (1,100 shots) or the D300s (950 shots) and the battery life is on par with the rest. There are options for adding a battery grip that doubles battery life and gives a range of holding and shooting patterns.

The Nikon D7000, like the rest of the Nikon line, uses an electronic stabilization sensor coupled with IR lenses to reduce or remove shake and vibration in the shot. This works well with the IR lenses in the line up and “not so well” without. The ability is better than nothing but it pays to use a good tripod or bipod for quick speed shots or outdoor field shooting.

The D7000 is a definite step up from the D90. The D7000 is a modestly priced camera that allows those with modest budgets to get into the “next level” of shooting without huge expense.