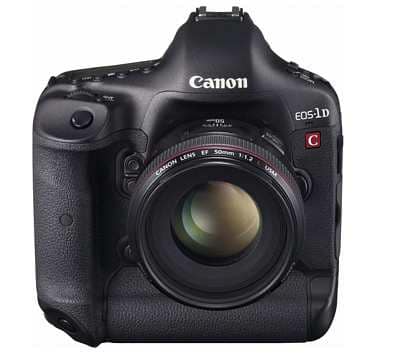 Canon seems to be going against popular thought with its EOS-1D X full frame DSLR. Instead of building on the sensor power of the predecessor Canon EOS 1Ds Mark III and its 21 megapixels, Canon instead goes to a lower megapixel sensor of 18 mp for the EOS 1D-X. The company’s reason behind this is two-fold: the handling and menus are much more intuitive; the fps (frames per second) is a bold and impressive 12 fps. This is new territory for a camera in the professional realm, and the EOS-1D X sits boldly atop the heap as a result.

The Canon EOS-1D X comes with the following functions out of the box:

With the EOS-1D X, Canon changes the professional camera world with the new sensors found in the camera. When compared to similar models such as the Nikon D7000, the EOS-1D X is a speed demon that can handle burst shooting and multis better than anything currently on the market. The 36-x 24mm CMOS sensor allows the camera to go into auto focus during the 12fps as well as monitor and adjust metering as the conditions change. This alone is worth its weight in gold for any shooter doing sports, action or wildlife photography as it gives precise and pinpoint shots during chaotic field use.

Switch to the Live View mode and the sensor goes into either phase detection focusing or contrast detection depending on the shooter’s needs. Hit the HDR menu option and the EOS-1D X shoots in.jpg and RAW, saving three images in different data composites (constituent and composite). This goes directly into one of two SD cards that the EOS-1D X is equipped to accept (up to 64GB). It is hard to compare this to a competitor’s product, as this tech has not yet reached them.

A professional DSLR should feel like a beast. The EOS-1D X is no exception. Upon lifting it, it feels like a camera that is built to last and undergo extremes. The SD card enclosure is stout and gives confidence to the shooter that nothing will compromise the priceless cards while in the camera. At 6.2 x 6.4 x 3.3 inches the EOS-1D X is noticeably bigger than most other DSLR cameras in this range, so much so it may warrant a larger case or field bag. A full weather sealing gives the EOS-1D X a tight and powerful water resistance and can be used in inclement weather.

Canon outfits the new EOS-1D X with a “multi-control” joystick placed to the right of the LED screen. This is easily and intuitively controlled with the thumb. A second joystick control is placed to the back left for use during portrait shooting angles and degrees. The hierarchy/menu follows prior Canon models, so those familiar with the company’s menu structure will be ready to use the EOS-1D X straight out of the box.

The 3-inch LCD display screen gives rich color and composition displays. Glare-free coatings allow users to shoot in bright sun or lighting and still be able to accurately compose and see via the screen as well as the eye-viewfinder.

This is where the new EOS-1D X shines. With an automatic white balance as part of the default shooting mode, pictures come out with warm tones and crisp colors that rarely need calibrating during post. Setting the iFCL metering system to on yields results that give fantastic and accurate exposure even under difficult light situations. Again, this raises the EOS-1D X over former lines in Canon’s DSLR line up and over other competing cameras.

Going into the AF mode takes some time. Getting the full effect of the feature requires diligence and patience to program it for the shooter’s personal needs and uses. This is not an intuitive process and will take some time until the setting feels right and accurate. That said, once done the AF setting is as sharp and accurate as any camera on the market. Shooting in low light under the adjusted AF mode produces images that are incredible; yet do not stack up to the Nikon D800 and its whopping 36-megapixel abilities. Expect to see small amounts of noise under ISO speeds above 51,200.

As mentioned, the EOS-1D X is probably the fastest camera now on the market for the professional photographer. The 12 fps blows the D800 out of the water and produces images exact and precise. If the mirror lock-up is switched on (removing the autofocus) the EOS-1D X shoots a blistering 14 fps! There is no other camera that can accomplish this today. When set to the lock-up, the 14 fps can be shot in.jpg only, but that is hardly a detriment when shooting scenes that require such speed (wildlife, birds, auto races, etc). Full-frame quality comes with the high speeds, as this is a hallmark of the new Digic 5+ processors set into the camera.

The weak link on the EOS-1D X is battery life. When using the 12 fps, the battery lasts a weak 300 shots. Expect around 350+ when not using the high fps setting. Because of this, users should carry several fully charged battery packs when doing remote shots or fieldwork. The included battery pack can undergo several thousand charging cycles before power is compromised and life becomes an issue.

When any shooter purchases a camera with a price tag of $6500, they expect the absolute best in terms of design, stability, duration and quality. Canon ups the ante with the new Digic 5+ processors and makes the EOS-1D X one of the premier cameras on the market in this category. It more than handles its own against the D800 or D7000 and stands out among its own company’s other cameras. The EOS-1D X is a powerful tool that opens up new shooting possibilities even at the expense of higher resolution sensors.