Feel like you need some more information before you decide what’s best for you?  We’ll take a better look at the differences and strengths of both DSLR cameras and camcorders, as well as a few simple things that can be done to make your video better regardless of what you choose to record it on.

Are DSLR Cameras better than Camcorders at Video?  If you’re new to videography and want something simple and constantly optimized for recording, a camcorder is the way to go.  If you plan on doing a variety of still photography and video recording and don’t mind a bit more complexity, then a DSLR camera is the better choice.

While it depends on what you’re planning to shoot, it basically comes down to this: camcorders are easier and faster to use well, but DSLR cameras are more versatile and can yield better results under certain conditions.  Ultimately, your preference will probably depend on what you’re going to shoot.  Both DSLRs and camcorders have different pros and cons when it comes to video recording.

The Difference Between DSLR and Camcorders 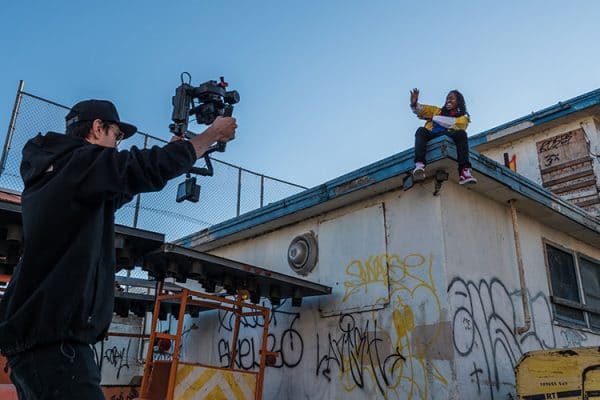 DSLR Camera (and its Pros) 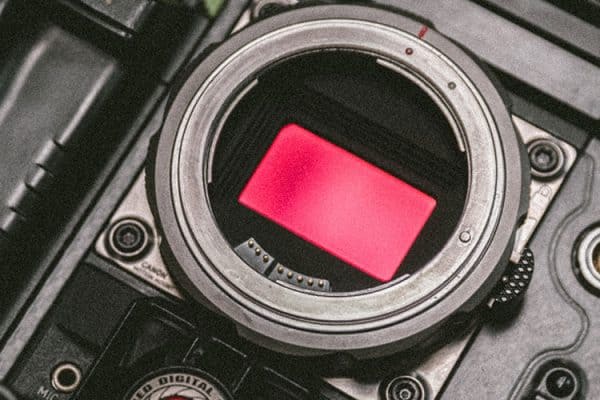 Large sensors- The sensor is the part of the camera that measures how much light is present and in digital cameras, they automatically adjust settings to take advantage of whatever light is available.  Larger sensors mean that DSLR cameras can produce higher quality images (both photographic and video) in lower levels of light, and this means that shooting will be easier for you in that you may not need to set up auxiliary light sources.

Memory cards- DSLR cameras use removable memory cards to store photos and video.  They’re easy to use and carry; if you run out of space on one card, you can simply pop it out and replace it with a new one no matter where you are.  Many laptops and desktop computers also have SD drives where these cards can be placed directly into the computer to easily move footage and photos for editing without the use of cables or external hardware.

Camcorder (and its Pros) 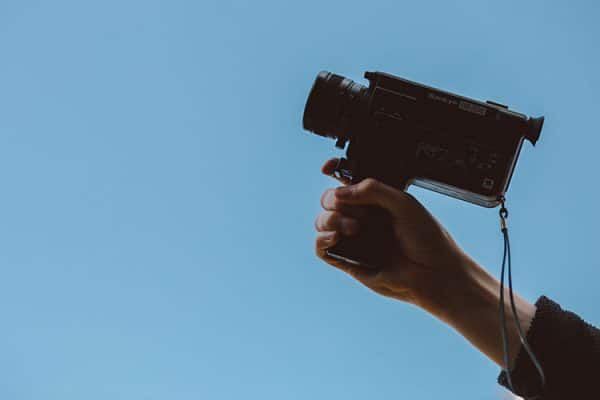 Camcorders are specifically made to take video.  They have various mechanisms to make recording easier, including stabilizers for shaky hands.  If you have never shot digital video before and you want the easiest way to do so, a camcorder is the way to go.  They are fitted with a sensor and pre-determined settings that make shooting video easy and fast, and they are designed to fit comfortably into the palm of a hand.  Some notable features of camcorders include:

Record Buttons- On camcorders, the main button will be the record button.  No settings need to be changed to record video; all the user has to do is hit the button and recording will start.  Usually, if the user hits it again, the recording will stop.  It is the simplest possible design interface, particularly in comparison to DSLRs, where a user will have to first find a video setting and then often locate a record button that is separate from the main photo shutter button. 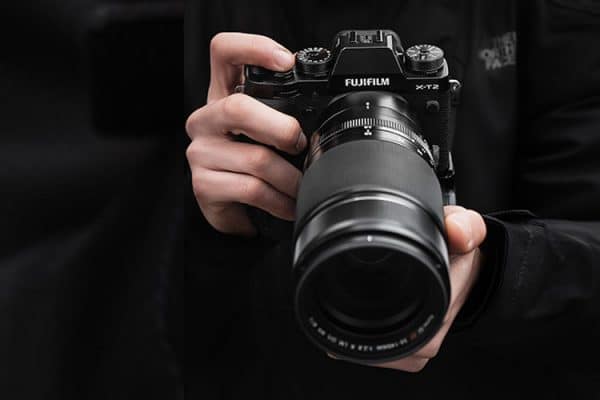 Digital Zoom- This feature is nice because it easily creates a smooth zoom motion at the press of a button.  On DSLR cameras, zoom is part of the lens and must be adjusted manually by hand.  This can result in shaky, uneven zooms, and it can also accidentally change the focus of the shot.  A digital zoom button corrects all these issues while being easier to use.

Flip-out screens- When recording video, you may need to hold the camera at varying angles that would make using a traditional viewfinder impossible.  Likewise, a static digital display screen can be difficult to see for the same reason, particularly if you’re using the camera to film yourself without a separate camera operator.  Flip-out screens can rotate and move so that you can see what you’re recording no matter how you move or hold the camcorder.

Hand straps– Hand straps are a “hand-y” feature that just make holding the camcorder easier.  In general, camcorders tend to be fairly small and operable with a single hand, and a strap just adds comfort and security to the single hand you’re using.

Tips to Optimize a DSLR for Videography 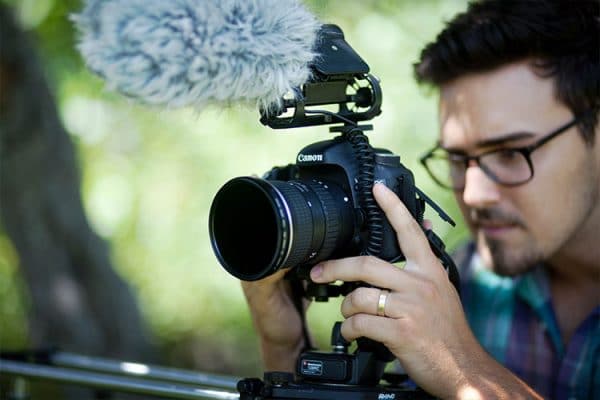 So, as we’ve discovered, camcorders are always optimized for taking video, while DSLRs aren’t.  However, when used well, DSLR video can give a highly professional and polished look.  What can be done to improve the video taken by a DSLR?

This may seem like a given, but if you’re new to any kind of photography, you’ll have to learn the difference between a 55mm lens and a 35mm lens, as well as others.  They’re all useful, but different lenses are better for different kinds of shots.  Some will be better for racking focus while others are best for static, wide-angle shots.

If you’re shooting any kind of creative project (basically anything besides a home movie or static recording of an event), planning your shots and knowing what kinds of lenses and equipment you need ahead of time will save you time and frustration when it comes time to record.

When recording video with a DSLR, you may have to manually adjust focus.  Some DSLRs can auto-adjust focus when taking video, but it’s not always the most cooperative feature, so why risk losing footage by having it out-of-focus?  When using manual focus, use static objects as your point of reference, especially if you’re filming something or someone that is moving within your frame.  When the subject is in line with that object, focus to the object.

This applies to camcorders as well, but there are sometimes options to use effects while recording in camera.  This includes color-gradings like black and white, and sometimes things like editing effects too.  It’s always better to shoot “normal” video in the camera and do any kind of editing afterward on a computer.

Related Questions for Taking Video with Both DSLRs and Camcorders: 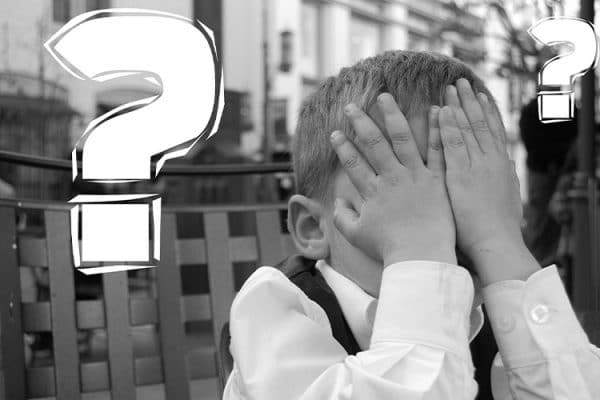 Is the sound quality better with either method?

Is it easier to hold a DSLR or a camcorder steady?

Again, camcorders are often easier to hold steady because of their shape, size, and lighter weight than a DSLR.  However, it’s always difficult to hold your video-recorder of choice for extended periods of time, and no one likes to look at very shaky footage for extended periods of time.  Because of this, consider using a tripod or stabilizer of some sort to ensure that your video is clear and won’t make your viewers feel motion-sick.

Do you need to allow extra time when recording with either method?

Regardless of whether you’re using a camcorder or DSLR, it’s always a good idea to wait a few seconds after pushing the record button to start capturing the main action of your shot.  In both pieces of equipment, recording usually doesn’t start immediately after you push the “record” button; it often takes a second or two to start capturing.

Is it easier to edit the video from one source over the other?

In general, both camcorder and DSLR footage is easy to export from either the camcorder hard-drive or the SD card to a computer for editing, but DSLR footage can be in a variety of formats.  Some of these need to be converted into other formats in order to be easily workable.  Sometimes, this means working with codecs, and more info on that can be found here.

If you have access to both camcorders and DSLR cameras, it’s best to test out the two to see which you personally prefer because your comfort with the equipment will impact your finished video product.  To reiterate, camcorders are easy to use, compact, and good for video-only work and beginners.  DSLR cameras are a bit more complex and temperamental, but they can yield more professional-looking and diverse results.