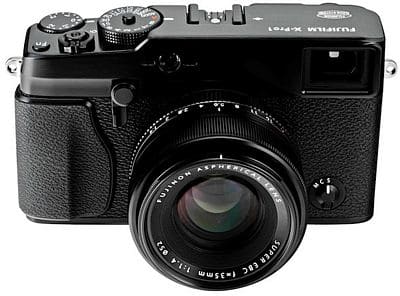 Fuji announces the start of an all-new camera system with their semi compact; retro styled Fuji X Pro1 Digital Camera. Some say it is a ‘beefed’ up version of their X100 with interchangeable lenses but it has a lot more going for it than just the lenses. It is also larger than the X100.

Several interesting elements like analog control dials and a set of compact, large-aperture primes are available at launch. A big factor is their brand new lens and mount. Fuji is targeting a high-end audience with a high-end ($1600 body) price.

One of the most interesting changes is on the inside of the camera with its 16 MP APS-CX Trans CMOS sensor, which is a proprietary Fuji design. Fuji has made such a commitment to this new system that it is assuring the public that they will have seven more lenses available by the spring of 2013 for the X Pro1. There will also be new models to come, too.

From the outside, there are a few noticeable changes from the X100. The front and the top plate of the two cameras are almost identical, with two exceptions. The focus selector has been added to the front of the X-Pro1 and the viewfinder mode switch has been moved down. Also, the exposure compensation dial is recessed so that it is more difficult to accidentally move it.

Most of the changes are to the rear of the camera where a four-way controller with sizable buttons replaces the old job dial of the X100. The size and position of the other control dials have also been changed to a more ergonomic setup. There is no RAW button anymore and now there is a Quick Menu button in its place. Just like the X100, there is no mode dial and the only mode options available are Bulb, Time and Auto, which are added to the shutter speed dial. In conjunction with the lens is the Auto mode. The 1.23m dot resolution 3-inch RGBW LCD display makes for great viewing and still takes up the majority of the rear of the camera. It allows for a wonderful level of detail at 100 percent magnification.

The viewfinder is a hybrid that takes the best of the EVF and the OVF and creates a combination where you can shoot through the EVF and review the shot taken in LiveView and you will not have to take your eyes off of the viewfinder. It is also very fast so your experience is as good as it gets with DSLR shooting.

The aperture is on the lens and not the camera and the aperture lens rings have an A setting. So working in full auto mode you set A on the shutter speed dial and the aperture ring. If you want to work with either in priority mode just set the fixed setting to A and select one variable one on which priority you want.

Even though this is a classic looking camera, there is a new, cutting edge sensor that is technologically advanced. It eliminates the need for an anti-aliasing filter. The 16MP APS-C X-trans CMOS sensor of the X- Pro1 uses a new color filter to solve all of the moiré issues. Because of this, there is no need for a low-pass filter, which usually results in an unwanted softening of your images. The image quality is unprecedented in any of the competitor cameras.

With the sensor design, image quality has almost an unrealistic sharpness that is so impressive combined with the smooth recording of light’s subtleties, the Fuji FinePix X-Pro1 makes the resulting image pop the same way that film comes alive.

There are three lenses available at the launch and another seven were promised by Fuji by 2013. The prime lenses that are available now have large maximum apertures in a relatively compact size. Even the largest lens is smaller than the Sony Carl Zeiss Sonnar E 24mm F1.8 for the NEX system.

Fuji says that even the edge shape of the blades is optimized for the greatest image quality. The lenses are the XF-18mm f/2R; XF 35mm f/1.4, and the XF 60mm f/2.4 Macro. All three of the them are solidly built, fast, and high performance optics that benefit from the X-Mounts reduced flange back distance of 17.7mm. The lenses all have finely-crafted metal hoods that for the 18mm and 35mm are rectangular while the 60mm has a deep, circular hood.

One of the greatest advantages to mirrorless cameras is the use of a vast range of lens through mount adapters, which include the top Leica M-mount primes. To use the adapters, you will need to download and install the Firmware 1.1, which will offer well-needed refinements. Fujifilm’s own M-mount adapter tells the camera when it is attached and allows you check elements of the body and lens that you would not be able to check on the third party adapters.

Traditionally, interchangeable lens compact cameras are not geared towards professional photographers who are used to their DSLR systems but this camera would be the exception to the rule. The image quality runs head to head with the DSLR systems and is worth trying.

Fuji has moved from the fixed-lens FinePix X100 to its better, evolutionary successor the X-Pro1. While the best attributes of the X100 are still around, the new X-Trans CMOS sensor provides us with much better photos. The camera is solidly built with a wide choice of modes and a well laid out menu that offers quick access to all of the settings. It most resembles the Leica M9-P and is much less expensive. Having said all of this, the major problem is with the manual focus. It is slow compared to its mirrorless peers and the focus rings are rather irresponsive. If you can deal with that, the things that stand out the most are the handling, the viewfinder, and the image quality.