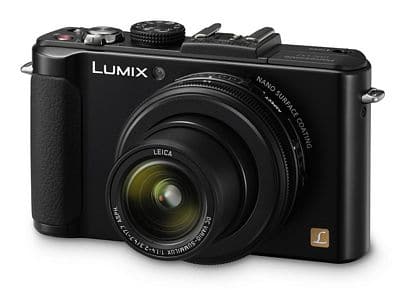 July 18 Panasonic announced the release of the LX5’s replacement, the Lumix DMC- LX7 into the compact camera market. They incorporated a 1/1.7 inch CMOS sensor. Even though their lens covers the same focal range as its predecessor, it is two stops faster and has a decent speed throughout the entire 24-90 mm zoom range, which is where the Canon S100 and the Sony RX100 are lacking. The DMC-LX7 features a F1.4 aperture at the wide-angle end of its zoom, making it a nice option for low-light shooting and shallow depth of field effects.

The DMC-LX7 still has that retro look of the LX5 and the same physical knobs, buttons, hot shoe, manual controls, and the 3.8x optical zoom lens (24mm to 91mm) as the LX5 with a major difference being that 10 megapixel F1.4 aperture lens at the wide-angle end and the aperture still very wide at the telephoto end, with a maximum aperture of F2.3 at full zoom.

The CMOS sensor is different than the CCD sensor in the LX5 because it can capture 080p high-definition video at 60 frames per second. You can use the camera’s manual aperture and shutter controls as you film.

Never before has any Panasonic Lumix consist of so many interchangeable lenses. The lens unit consists of 11 elements in 10 groups with five aspherical lenses with nine aspherical surfaces. To make the most out of the fast lens, Panasonic added an aperture ring around the lens barrel beside a 3- stop neutral density filter with its own external control point. Like the two other new Panasonic models, the FZ200 and the DMC G5, the lens employs Panasonic’s Nano Surface Coating that reduces flare and ghosting. With the 24-90mm equivalent optic and an aperture range of F1.4 to 2.3, it surpasses the new Sansung EX2F’s 24-80mm F1.4-2.7 at the long end. The Lumix LX7 captures approximately 136% larger viewing space compared to that of a 28mm wide-angle camera while minimizing distortion at the wide end so users are able to create exceptional resolution and detail.

The new LX7 sensor has a 1/1.7 inch 10.1 megapixel High Sensitivity MOS that features a better S/N ratio by 1.5dB compared to the LX5 even though it is smaller than the LX5’s CCD or roughly 80% of the area with the multiple aspect ratios of 16:9, 3:2, and 4:3. They use different crops from the sensor area to give the same diagonal angle of view. They are changed using a switch at the top of the lens. Continuous shooting specs are at 11 fps at full resolution with the exposure and focus fixed, or 5fps with the AF tracking, which is twice as fast as the older LX5.
The MOS sensor has greatly improved the video specification and the LX7 can now record Full HD video in both the AVCHD and the MP4 formats. It runs at both 60fps or 30fps and can zoom and refocus while recording. A stereo microphone provides the sound but the microphone is tightly placed on the top plate right in front of the Hot Shoe.
On the back of the camera is the port for the DMW-LVF2 electronic viewfinder with a 1,440k dot-equivalent resolution that is better than the LX5’s LVF1.

There are 6 preset Photo Styles with Standard set as the default. The noise reduction, contrast, sharpness, and saturation can be set individually for each picture style and there is also a custom style for creating your own looks. Besides Standard mode there is Vivid, Natural, Monochrome, Scenery, and Portrait, with the 16 different creative controls to be Expressive, Retro, High Key, Low Key, Sepia, Dynamic Monochrome. Impressive Art, High Dynamic, Cross Process, Toy Effect, Miniature Effect, Star Filter, and Smooth and Radial Defocus.

Something that is lacking on many of the comparable models is the Anti-shake feature. It works great when holding the camera in low light conditions or when using the telephoto end of the zoom range.
The Macro performance is wonderful also in that you can focus as close as 1 cm away from your subject and get good results. Further sharpening takes the soft image and makes it much better.