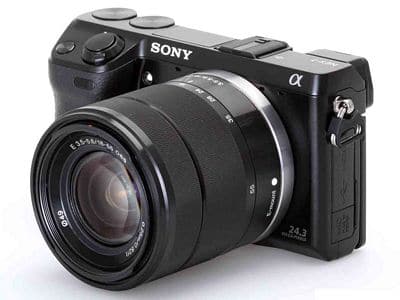 Sony’s Alpha NEX-7 puts a lot of features into its small body with its 24MP APS-C CMOS sensor and a sizeable 2.4M dot OLED high-resolution electronic viewfinder. It has a three-dial interface that makes for good handling while the drawback could only be finding the right lens to get the most out of the camera. It is just the right camera for the enthusiast who is looking for a small body camera (a bit larger than the NEX-5N) with excellent still and video image quality.

The NEX-7 expands on its predecessors user interface by adding two dials on the top of the late that controls a wide variety of functions with a conveniently placed button beside the shutter that cycles through all of the functions. This is such a sensible arrangement with the triple dial control that has one dial dedicated to each of the main exposure parameters such as shutter speed, aperture and ISO in Manual mode.

There is a new shutter arrangement in the NEX-7, too with an optional electronic first curtain. What this means is that the camera does not have to close the shutter and then open it again to the start the exposure. Sony says that this option decreases the shutter lag from 100ms to just 20ms. Canon has been using this same technology since 2007 in its EOS 40 D.

The CEX-7’s Carl Zeiss branded E 24mm F 1.8 lens offer a field of view like a 35mm lens in full frame and places it in competition with the Fujifilm FinePix X100.

<liBuilt in flash and Alpha Hotshoe

The Body and Design

The front of the NEX-7 is dominated by a deep, large handgrip with the lens mount to one side. It has an exclusive Black version of the E 18-55mm F3.5- 5.6 OSS zoom kit that makes the front a good-looking camera. There is little space wasted on the back where the majority of space is taken up by the tilting screen, and the electronic viewfinder is placed at the top in the left corner. The controls are placed around the tilting screen and the traditional mode dial has been replaced with an on-screen virtual version.
The large, thick rubberized handgrip while the body is metal-shelled. The buttons, including the three control dials are metal and the impression of the camera is to give you as much control as possible with few gimmicks.

The top of the camera is efficient with the electronic viewfinder on the left, than the flash hot-shoe for the built-in pop-up flash unit next to it on the right. The twin top-plate dials are behind the power-switch and then there is the shutter button and function navigation button to the far right. The silver metal lens mount is to the front while the tilting screen is flush at the back of the camera.

Sony’s native E-mount is undeveloped compared it it’s Micro Four Thirds or Samsung NX competitors with just three zooms and four primes but you can fit the Alpha mount SLR lenses using the LA-EA1 or EA2 adapters. With adapters there are a huge range of lenses that you could use with the NEX-7. The built in EVF and focus peaking display make manual focusing a breeze.

This is really a standout feature in this model. Sony’s OLED is small but impressive and sit at the top left corner of the body with a diopter adjustment dial to its right. The proximity sensor automatically switches from the real screen to the EVF when you bring the camera up to your eye.
The obvious EVF advantages are that you can preview how your images will look in brightness, white balance, color rendition, and depth of field. It also includes a live histogram and electronic level. You can move the AF point anywhere in the frame and magnify the picture for perfect manual focus. The size of the viewfinder is comparable to that of a full frame SLR and has a 100% field of view.
The tilting screen has a resolution of 16:9 and can tilt upwards 90 degrees or down 40 degrees for overhead shot. This feature is a bit difficult to use when the camera is on a tripod due to the socket position so close to the screen.

The shooting modes consist of Program, Aperture Priority, Shutter Priority, Manual, 3D sweep Panorama, Anti-Motion Blur, and Intelligent Auto, which leads to the Scene Modes. The Auto ISO has some limitations because it is limited to 1600, the same as the NEX-3 and NEX-5. The Auto ISO will maintain a shutter speed of 1/60 second or 1(2x focal length).
The Scene modes are made up of Portrait, Landscape, Macro, Sports Action, Sunset, Night Portrait, Night Scene, and Hand-held Twilight.
The types of White Balance are Auto, Daylight, Shade, Cloudy, Tungsten, Florescent, Flash and variable Custom settings.

The Creative Styles have 13 styles from your Standard to B&W and Sepia with some unusual ones like Sunset and Autumn.
There are 13 Picture Effects from Toy Camera. Pop Color, Retro, High and Low Contrast, HDR Painting, and much more. These effects can only be shot in JPEG and most of the effects can be used when shooting movies.

The Sony Alpha NEX-7 has been a great camera with its excellent EVF making both still images and video quality very good for such a small camera. The three control dials are a pleasure to use and make control of your pictures quite simple. The 24MP sensor gives the user large amounts of detail while also offering excellent high ISO performance. With your choices of lens, you can set up the perfect camera for your liking at a price starting at 1100 dollars.