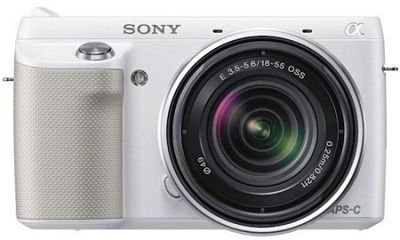 Sony, in response to Canon’s PowerShot G1 X and Nikon’s One mirrorless sensor cameras, comes to the table with its Sony Alpha NEX-F3. The Alpha NEX-F3 is a smallish camera that looks like a point and shoot but has the abilities of a DSLR. Sony makes sure to outfit the Alpha NEX-F3 with the ability to change out lenses for different shots. The Sony Alpha NEX-F3 is priced at $599 to keep it within reach of modest budgets. When compared to the $800 for the Canon PowerShot G1 X or the Nikon One’s $500 it is well within its competitors’ price range.

Also included (in the box kit) is an AC charger, USB to camera transfer cable, CDs with software and drivers for photo editing, a shoulder strap and a user manual.

Sony produces several other products that are available aftermarket for the Alpha NEX-F3. These include a 50-200mm lens, extra battery packs, external flash, light meter and the LA-EA2 adapter that allows the Alpha to accept any A-mount lenses.

The Alpha NEX-F3 accepts SD, SDXC, SDHC and the Memory Stick Pro Duo cards for storage. Cards up to 64GB can be used with the camera.

As mentioned, the Sony Alpha NEX F-3 has a size and weight that is reminiscent of a point and shoot camera. There is a pronounced palm rest to the side of the camera that makes one-hand use a breeze. In regards to its competition, the Sony is closest in size to the Nikon One. The main body (lens mount to LED screen) is just a shade over 3-inches, with the top and bottom measuring in around 2.2-inches each. The weight without a lens is 18-ounces. This is not going to fit in a front pocket, but can easily be placed in a jacket pocket or in a small compartment on a backpack or field bag.

One of the biggest features that separates the Alpha NEX F-3 from the Canon and Nikon offerings is the flip-out/up 3-inch LED touchscreen on the back of the camera. A hinge allows the screen to face forward (toward the subject) or rotate a full 180 degrees off the pivot. The screen takes advantage of touch technology allowing the user to navigate through the settings via a fingertip. This feature is a joy to use and allows for a myriad of options when trying to get difficult angles and shots. Be aware that when open and flipped all the way up it makes the camera a shade more vulnerable to damage should it get dropped or jostled. Off the touchscreen are sets of control buttons that give users the ability to switch between full auto or full manual operations.

Sony also equips the Alpha NEX F-3 with a built-in flash, separating it from the Canon PowerShot G1 X. The flash operates adequately but does give a washed out feel to shots that are close in or done in faint light conditions. While the built-in flash is great for impromptu sessions, it should not be used as the primary flash for sophisticated shots or sessions, as it is too limited to give minute changes or light in delicate shots.

Photo Quality and Use

Sony makes the Alpha NEX F-3 for people who want the power of a DSLR in a small package. The photo quality is a step above point and shoots for sure, with rich colors coming in through the 16-megapixel sensor. There is little noise to the edges of pictures and with the internal basic editing tools can be corrected off the camera to give more control over the picture quality.

To keep the use of the camera simple and intuitive Sony uses a very simple and watered down menu. This allows users to get up and running right out of the box. As skills grow it is easy to continue to build the pedagogy of use with the Alpha NEX F-3. When manual options are wanted, a switch off the back allows users to go to full manual. Aperture and depth settings can be manipulated from the lens or from the touchscreen menus. A preview mode allows users to see the shot, as it will appear prior to taking the picture itself.

The built-in software processing means almost every.jpg shot with the Alpha NEX F-3 undergoes some electronic alteration. This may or may not be a good thing depending on the user and needs. If more precise control is wanted on the picture quality without the computer alteration, switch to the RAW setting. This allows a pure image to be taken that can be worked in during post-sessions or editing rooms.

Video clips are captured via 1080p quality with the Alpha NEX F-3. The controls to switch from stills to video are on the camera’s button panel or via the touchscreen. The Alpha NEX F-3 does a fine job getting motion and video captures, but it tends to go soft at the edges and needs corrections after the shots if a crisper or cleaner video is desired. The video setting is perfect for capturing family events or pets playing but is not at the level of professional video production. The video abilities are a nice feature for a camera in this category and should be well within the needs of the average consumer for cameras such as the Alpha NEX F-3. When video images are compared to other cameras such as the Nikon One, the Alpha tests out on the same level of quality.

The Sony Alpha NEX F-3 is a perfect camera for consumers who want to “cross the bridge” between DSLR and simple point and shoot cameras. With a modest price of $599, the Alpha is an attractive and smartly priced product. Image quality is sharp enough for most casual users, and the size makes it easy to pack away for trips and travel. Compared to other cameras in this category, the Sony Alpha stands above due to price.